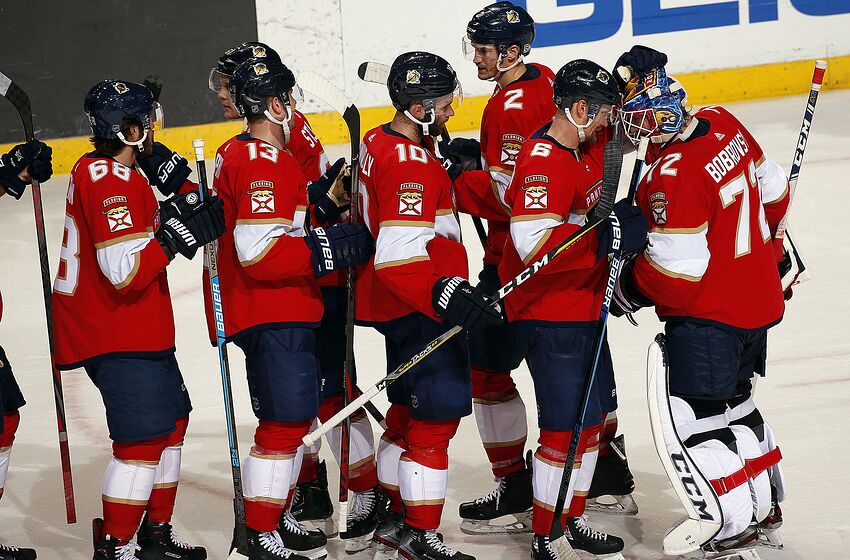 SUNRISE, FL - JANUARY 09: The Florida Panthers celebrate their 5-2 win over the Vancouver Canucks at the BB&T Center on January 9, 2020 in Sunrise, Florida. (Photo by Eliot J. Schechter/NHLI via Getty Images)

After dropping a tough match to the Arizona Coyotes, the Florida Panthers were aiming to bounce back against the Vancouver Canucks.

The Florida Panthers opened up play beautifully, attacking from the very start to dictate the tempo. Because of their resilient pressure, the Cats got on the scoreboard first.

As Quinn Hughes was looking to dish the puck as he was skating backwards, Vincent Trocheck threw a hit and caused a turnover, dishing the puck over to Noel Acciari who would proceed to snap a shot past Thatcher Demko.

Less than two minutes later and the Panthers struck again. This time, Colton Sceviour broke down the ice on an odd-man rush, feeding Mark Pysyk who would tip home his third of the year to give the Panthers a two-goal lead.

Unfortunately, moments later – as the Canucks were starting to pick up their play – forward Brock Boeser redirected Tyler Myers point shot to cut the Panthers’ lead in half.

Despite conceding, the Panthers continued to attack, searching to regain their two-goal advantage. There were some obstacles along the way that the Panthers had to overcome, like Mike Hoffman’s penalty, but they were able to survive whatever came their way, continuing down their same path.

After the post denied Hoffman and Demko stopped Barkov on a breakaway shorthanded, the Panthers found their third through Evgenii Dadonov – who slotted a shot through Demko’s arm to send the Panthers into the locker room up 3-1 after the first period of play.

In the second, the Panthers continued where they left off, forcing the Canucks to retrieve in their end. With all the pressure thrown at Vancouver, there wasn’t anything they could do but hand Florida another power play.

On their second opportunity, the Cats managed to cash-in thanks to Mike Hoffman. Jonathan Huberdeau walked in, pulled off an insane toe-drag which left a Canucks player falling awkwardly, proceeding to dish out to Hoffman, who would go on to snipe it home to give Florida a 4-1 lead. With an assist on the play – and his second of the night – Huberdeau was sitting just one point shy of equaling Olli Jokinen’s record for most points in franchise history (419).

The Canucks and Panthers both exchanged power plays, but none were able to capitalize. Sergei Bobrovsky was solid at his end of the ice, denying the Canucks on back-to-back saves to preserve Florida’s 4-1 lead.

At the other end of the ice, the Panthers continued firing rubber at Demko, keeping him busy for the remainder of the second. With some of Demko’s saves, the Canucks were lucky to only be down by three, given how dominant the Panthers have been throughout the entirety of the game. The commanding Cats would take their sound 4-1 lead into the dressing room after forty minutes of play.

The Panthers closed out the third with a goal from Noel Acciari (his second of the night) after he redirected Aaron Ekblad’s point shot to give Florida a 5-1 lead.

Vancouver would end up tacking on a goal from Tyler Motte – after Mike Matheson gave the puck up in his own zone – which didn’t matter nor prove costly, as it was too little too late. Florida would end up closing out the game in dominating style, winning by a score of 5-2.

Overall, this had to have been one of the Panthers’ best performances of the season, as the compete level was consistent for a full sixty minutes, reluctant to take their foot off the gas pedal at any moment. Here’s hoping that the Cats can translate this play over to Sunday when they take on the Toronto Maple Leafs in a crucial meeting that could dictate their standing.

Next: Noel Acciari’s Emergence has Been a Pleasant Surprise

Be sure to tune in on Sunday, January. 12 @ 7 P.M. as the Florida Panthers take on their divisional foes, the Toronto Maple Leafs in a vital matchup.