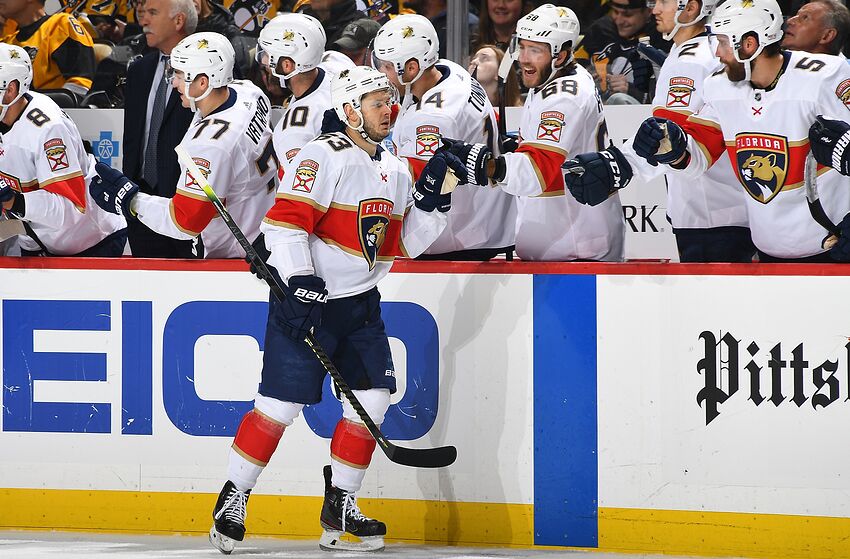 PITTSBURGH, PA - JANUARY 05: Evgenii Dadonov #63 of the Florida Panthers celebrates his goal with the bench during the third period against the Pittsburgh Penguins at PPG PAINTS Arena on January 5, 2020 in Pittsburgh, Pennsylvania. (Photo by Joe Sargent/NHLI via Getty Images)

Following sensational 2018 and 2019 campaigns with the Florida Panthers, Evgenii Dadonov is seemingly experiencing a career year in 2020.

The former third-round draft selection (71st overall) was signed away from the KHL during the 2017 NHL offseason. General Manager Dale Tallon was able to lure Dadonov from Russia, signing the veteran to a three-year contract worth $4 million per year.

Quite frankly, the Evgenii Dadonov acquisition is one of Tallon’s best free-agent signings during his tenure as the Florida Panthers General Manager. Since arriving to Florida in the summer of 2017, Dadonov has produced exceptional numbers while playing alongside superstars Jonathan Huberdeau and Aleksander Barkov.

The 30-year-old has undoubtedly recorded superb statistics in his second stint with the Cats. During the 2017-18 season, Dadonov registered a remarkable 28 goals and 37 assists for 65 total points in 74 regular-season contests.

Despite missing eight regular-season outings in 2018, Dadonov still managed to produce 65 points as well as a +10 rating, forming a dynamic first line with Huberdeau and Barkov. In fact, Evgenii Dadonov finished 15th in voting for the Lady Byng and 26th for the Selke.

The 2019 season was another step in the right direction for Dadonov. The dependable Dadonov played in all 82 regular-season games, recording a phenomenal slash line of 28 goals and 42 assists for 70 total points – finishing 14th for the Lady Byng. Essentially, “Dad” recorded career-high marks in assists (42) and points (70) despite experiencing a minor decrease in average time on ice compared to 2018.

However, even though Dadonov has looked brilliant these past 2 seasons, the Russian star is currently playing like a superstar with the Panthers. While suiting up in all 42 games this season, Dadonov has registered a spectacular 18 goals and 16 assists for 34 total points, along with a plus/minus rating of +4.

In addition, Dadonov is only averaging roughly 17 minutes of ice time per game (lowest since 2012) but has managed to perform even better offensively. The USSR native is on pace for 36 goals and nearly 70 points, playing exceptional hockey for a team fighting for a playoff spot in a competitive Atlantic Division.

Dadonov is also in the final year of his three-year contract that he signed back in 2018 when he departed from the KHL. If Dadonov concludes the season on a positive note, then there should be no doubt that Florida will do everything in their power in order to retain Dadonov’s service for the foreseeable future.

The Cats will certainly continue to depend on Dadonov for consistent scoring and point production throughout the course of the 2020 campaign. The formidable first line, consisting of Barkov, Huberdeau, and Dadonov must remain potent and consistent in order for the Panthers to clinch their first playoff berth since 2016.

In regards to Dadonov, the Florida Panthers organization and fans can fully expect to see a 30+ goal and 70+ point campaign from the reliable right-winger.

Ultimately, the playmaking and goal-scoring winger will look to remain consistent on both ends of the ice and provide production on the top power-play unit (8 power-play goals this year) for the remainder of 2020.